Here's an interesting article and one more reason for us to avoid sugar. Take a look:

Is Dietary Sugar Driving You Nuts?
By E. Jean Perrins

Highly respected researcher Malcolm Peet has come across an extraordinary link between dietary sugar consumption and mental illness. This British psychiatric researcher has done an extensive analysis which proves a strong link between foods that contain sugar or convert to sugar in the body and the risk of developing both schizophrenia and depression.

According to his research, there are two ways that in-body sugar can influence mental health in a toxic way. As he reported in Psychology Today, first, sugar can suppress the activity and function of an important growth hormone in the brain called BDNF. This hormone regulates the health, functioning and maintenance of neurons within the brain. It also promotes new neuronal connections in the brain which support optimal memory function. BDNF levels in the brain are severely low in schizophrenia and depression. If sugar and sugar-forming foods are added to the diet, it can potentially bring on these conditions or make them worse. These two conditions very often result in shrinkage in the brain in areas which are affected by either depression or schizophrenia. In other word, brain damage can result.

Secondly, Peet discusses how sugar and sugar-forming foods triggers glycation in the body which contributes to a whole litany of chemical reactions that promote chronic inflammation. This is a different type of inflammation than results when the body needs to heal a small scratch or an insect bite. A little inflammation is necessary in the short term to trigger an appropriate immune response to heal a wound.

In the long term, a continuously irritating inflammation response in not a good thing, it actually disrupts the normal functioning of the immune system by making the various types of white blood cells lazy and unresponsive, in addition to causing problems in the brain.

There is increasing scientific evidence that inflammation is responsible for a whole string of serious and chronic illnesses and diseases, like arthritis, IBS, diabetes, dementia, Alzheimers, auto-immune diseases like Lupus, rheumatoid arthritis, Crohn's disease, not to mention gout and acid reflux. A number of mental health challenges arise as well. Even if these diseases are not yet present, scientists say the risk and the potential for them is there.

Cave men didn't eat sugar, because there wasn't any for many centuries. We did have an innate sweet tooth which guided us to eat whatever fruit we could find, when it was available. Because fruit was relatively scarce or unavailable because it was too high in the trees, we didn't have a problem with our sweet taste buds. When we discovered sugar cane a few centuries back, our sweet tooth became more of a curse. We developed cravings for sweet foods or foods that turned sweet in the body causing problems with foods we were not designed to eat consistently in large volumes. If you actually start reading labels in the supermarket, you will see how many products actually contain sugar or corn syrup. Some researchers are saying that corn syrup is even more dangerous than the toxic sugars in our bodies.

Peet suggests that as this research has come to light, he is encouraging his mentally challenged patients to cut out sugars and simple starches for a couple of weeks to see if they notice any improvement in their depressive symptoms. For the few that have had the courage and the determination of reduce their intake of sugars, breads, crackers and other refined foods, they have reported encouraging improvements in their mood, memory, mental clarity, focus and overall energy. Maybe it's time to look at how your mental state is influenced by your diet. 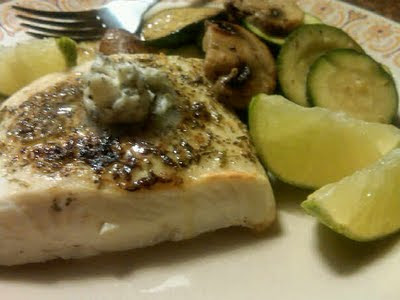 Since I love "Day 6" living and the recipes developed for it I'll be posting pictures and reports here for you to enjoy! This was tonight's dinner and it was outstanding! It just goes to show that healthy living does not have to be expensive, time consuming or icky. I am so excited for my LAWLS Neighbors to get started with these recipes - you are going to be thrilled and so will your tiny tummies and the loved ones at your tables.

You can also follow this thread in the Neighborhood to see what others are cooking for Day 6!

Sauteed the zucchini & mushrooms in the same butter/herb mixture as made for halibut.
Individuals seasoned with finishing salt & pepper to taste. Jim loved it and had second helpings. I enjoyed half my serving and was full, will be quite happy with it for lunch tomorrow!

Day 6: Beyond the 5 Day Pouch Test by Kaye Bailey

Day6: Beyond the 5 Day Pouch Test

Hey Neighbors -- This week you should be receiving via USPS my new book Day 6: Beyond the 5 Day Pouch Test! I am so anxious for feedback, so thought I'd open a place for your comments. Let me know what you think: I'm tough, I can take it. Please don't be too mean about the delays, though, I already feel lower than a Wyoming lizard's belly about all the problems we had on this project!

Also, if you didn't see it in the 5DPT Bulletin today, here is part of an interview my publicist did with me on the new book:

Day 6: Beyond the 5 Day Pouch Test
An Interview with Kaye Bailey


[HF] Kaye, your new book "Day 6: Beyond the 5 Day Pouch Test" was released November 30th as a follow-up to the successful 5 Day Pouch Test Owner's Manual. Why was there a need for a follow-up?
[KB] So many weight loss surgery patients have successfully found their pouch again by doing the 5 Day Pouch Test. The question is asked time and again, "What do I do on Day 6?" So it just made sense to assess what exactly works for maintainers, for myself, what concepts are important to embrace on a daily basis to stay on track. I compare the 5 Day Pouch Test to an airbag deployment, it is an emergency measure, not something you want to deploy with any frequency. So the concept of Day 6 is to figure out what works in a real life to keep us in the safety zone but still travel the roads of life.

[HF] So what are some of the secrets of Day 6 that keep you in the "safety zone"?
[KB] Well, there are the obvious things such as the Four Rules and of course remembering to avoid slider foods and respect the liquid restrictions. But I introduce several new ideas I think are meaningful. The "I Heart DIET" concept really empowers us with a new way of thinking about the word diet and having a food plan. As I explain when we have a diet or food plan we generally maintain weight or lose weight. But if we have no plan that is when weight is most commonly gained. DIET is an acronym for Daily Intelligent Eating Triumphs and it plays a leading role in the Day 6 way of life for us. It's not difficult or threatening or intimidating, though, it is empowering. I think when we use I Heart DIET properly it is one of the first times in our life that we release guilt that is often associated with eating. There are many other nuggets of wisdom and inspiration I think will be meaningful to my WLS Neighbors.

[HF] What do you love about your new book?
[KB] Wow. Well, I love the cover Gerald designed using the rainbow concept from the LivingAfterWLS website. I love that I was able to write in the same voice I have talking to close friends, like I was really connecting with everyone who reads it. The WLS Neighbors are so important to me, so inspiring. When I sat down to write I truly imagined having them with me, there in conversation. We connect on so many levels. This was really special to me. And I love that I have learned so much from so many over the last 10 years that this was a collection of shared knowledge and experience. We understand one another and I think it shows in this book, the deep connection. And of course I loved the recipe testing we did. You were there for a few recipe tests: good friends, good food. No complaints about that!

[HF] Is there anything you don't love about the Day 6 book?
[KB-Laughing] Well, this project had some freaky-doodle bobbles that nearly sent me on an extended stay at the funny farm! For example, the final manuscript was sent to me for sign-off and it left from Nebraska the same day that John {Kaye's agent} had flowers direct shipped to me from Miami. The flowers arrived in Wyoming the next day, but the manuscript took 5 days to get here - both on FedEX overnight! How do you explain that except for freaky-doodle? Maybe my next book will be the "5 Day Freaky-Doodle Test!" It's easy to laugh now, but it was a long frustrating 13 weeks from the time my manuscript was finished to when I had the books in my hands.

[HF] You mentioned the recipe testing. There is a big recipe section in this book, so will you be cooking a holiday meal using Day 6 recipes?
[KB] Oh absolutely! I think there are 66 all-new recipes in the "Cooking with Kaye" section. Let's see what I can think of off the top of my head. For a holiday brunch Scandinavian Scrambled Eggs would be perfect. So rich and creamy and easy to make ahead, add some fresh fruit and you have a perfect holiday brunch. There is a broiled halibut with savory Provence butter: elegant & delicious. I think there is a tomato basil salad that would look very Christmassy and go with any lean protein. And if you can find fresh strawberries the perfect dessert is the Strawberries Romanoff. Anyone who serves this is going to look like a culinary rock star! Oh, I could do several holiday meals from this book!

[HF] What is the most important message you want your readers to get from the Day 6 book?
[KB] Well, the first most important message is from my heart, that each and every WLS Neighbor matters and they are not alone. I hope that message is clear with my words because I wrote from my heart. The next most important message is the power of knowledge. I think we were not told quite a few things before surgery and if they were explained to us we would be more successful with our surgery. I used the book to explain some things we need to know like why we get in the habit of slider foods, why carbonation is bad, why alcohol affects us so differently. Things like this. Nobody really tells us ahead of time, and later when we go to our centers with questions we are often dismissed. But we are smart people, a little bit of knowledge is so powerful in making better use of this tool.

[HF] Are you working on a new book?
[KB] Isn't that like asking a woman in the delivery room if she's planning on having another baby? [laughs] Actually, there are two books in the works for publishing in 2010. One is called "Nurturing Neighbors" and it is a support group leader handbook. The other is the "I Heart DIET Cookbook."
Posted by Kaye Bailey at 12/14/2009 10:59:00 AM No comments: